We slept late and took our time getting underway.  It was surprisingly cool in Crescent City.  We were parked right next to the City Harbor and decided to take a walk to look around before getting back on the road.  It was dark when we came in so we were seeing our surroundings for the first time  Scamp was parked in front of a large marine building.

The basin just across the street had a number of fishing boats moored in it. 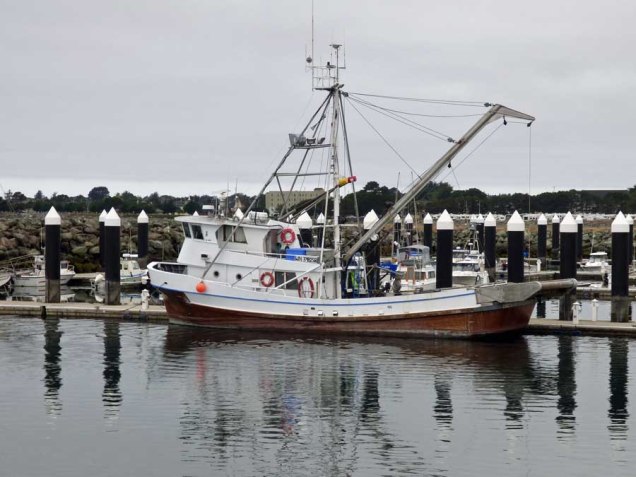 The city harbor has a large, complex breakwater system to protect it from the Pacific Ocean.  We read a signboard about the tsunami of  2011, after the big earthquake in Japan, that destroyed the large marina and most boats in the harbor.

This mermaid is sitting outside the marine supply store.

The sign behind Andy has a wavy blue line to indicate the wave height of the tsunami in 1964.  He is standing high above the normal water level. The water was 20.8 feet high.

Battery Light is on the far side of the harbor and in front of the town.

We walked out on the fishing pier to get a look at the seals we could hear in the distance. Several men were cleaning up after a fishing boat had offloaded its catch. We watched the tractor-trailer drive out as we walked onto the pier.

The seals were a bit too far away to see clearly with the naked eye, so I zoomed with my camera to get a better look. How cute is that? 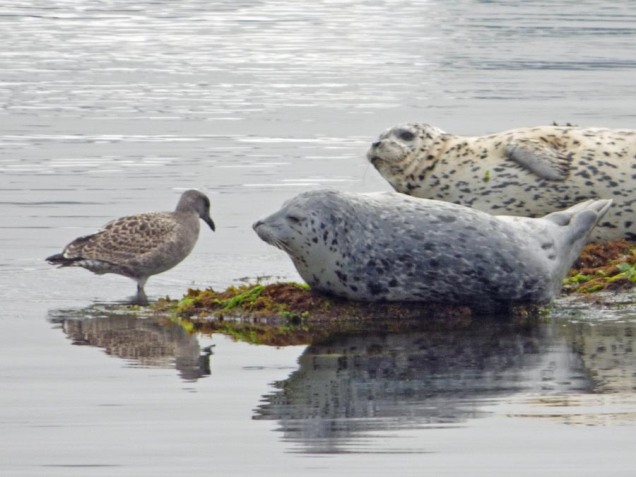 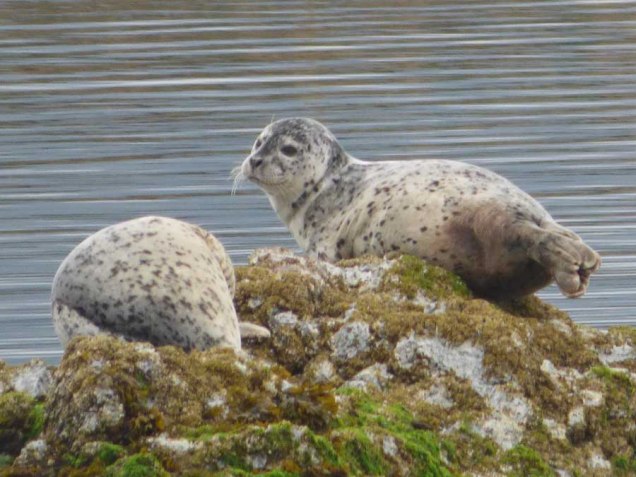 Several old piers were covered with seals.  Several of them were barking regularly.

This fixer-upper was sitting right behind Scamp. 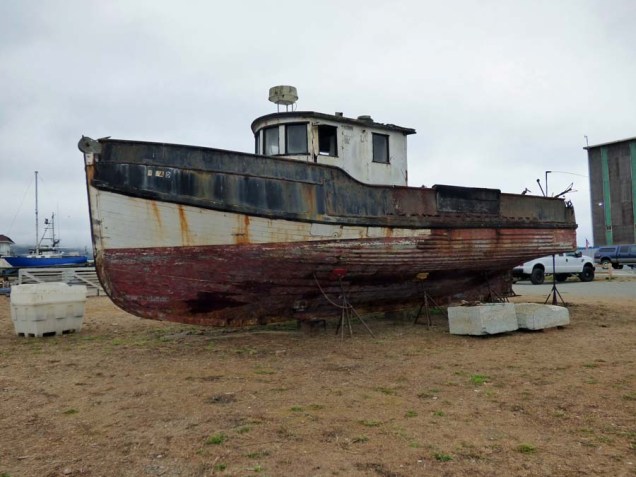 I finally reset my watch to the correct time zone, Pacific in Crescent City. It was only 82 miles to our destination so we to a scenic detour through a state redwood park. There were some extra-large specimens I did not photograph because I passed them by before pulling into a parking spot.  This one behind Scamp is not too small.

I was driving by a spot with several large trees and stopped by a woman walking along the road and leaned out the window.  “Ma’am, can you pause right there so I’ll have a scale model?”  She stopped and gave me a big smile for the picture. Nice tree.

Our next stop was at the Lighthouse Grill in Trinidad, CA.

The interior is artsy and cute.  You place your order at the window and they bring the food to the table. 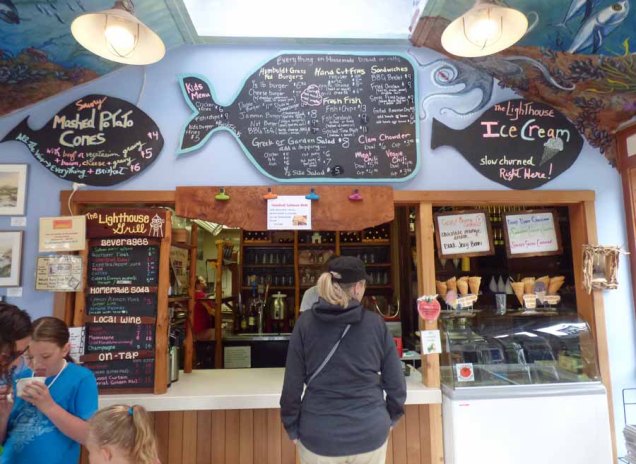 Here is why I always want to go to the Lighthouse. It’s a nutburger and I am crazy about them. I have been looking forward to this for months! I get at least one every time we visit Christopher. 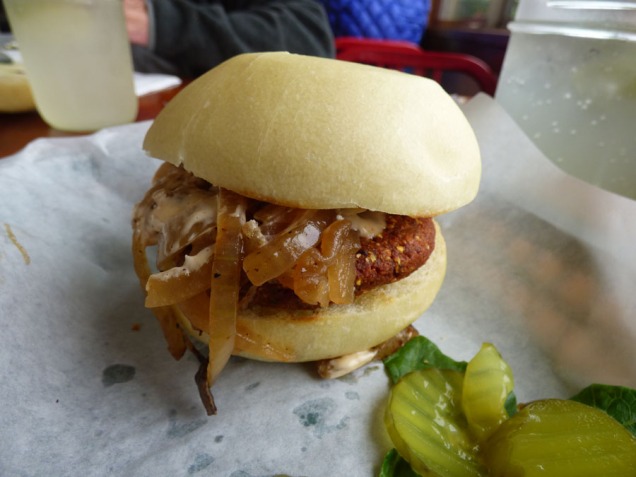 I pulled over at the Clam Beach overlook between Arcata and Eureka. 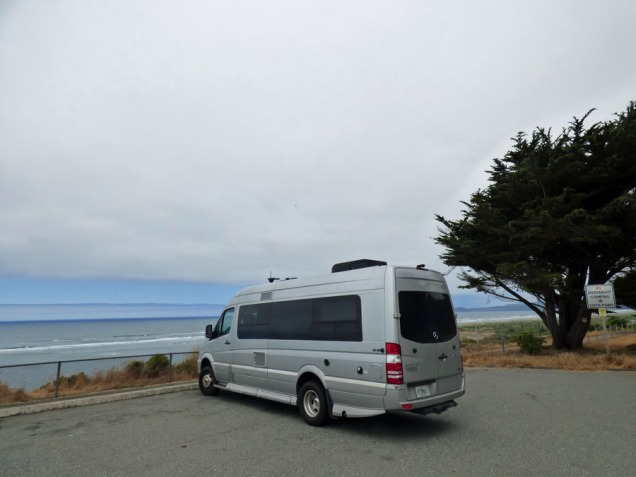 There were dozens of seals along the shore of a sand spit.

We got to Eureka at 1403 Pacific time and visited with Son Christopher during his lunch break. Then we drove over the bridge to a Samoa Beach. 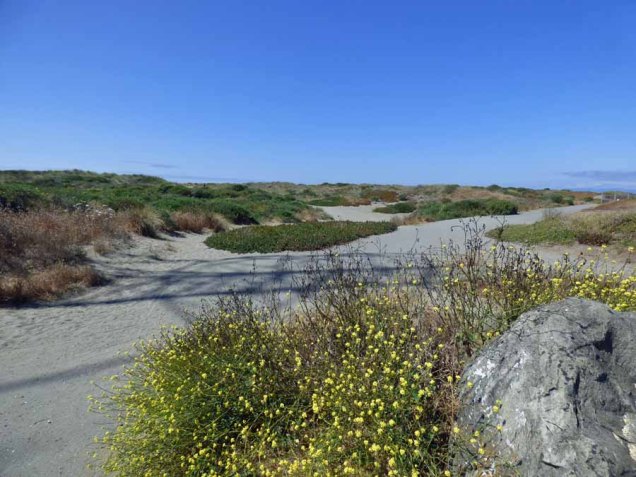 I have always been fascinated with the ice plant on California beaches.

It was a short hike over the dune.

We reached the Pacific Ocean and stood on the beach for a while, watching the waves, a surfer, and a few people coming and going.

Then we went back to the RV and took naps.