My good buddy JR Smullen has set me straight: “FYI, those are NOT cinder blocks.  They are concrete blocks.  Up north we call anything that looks like a cinder block, a cinder block, even though there is a big difference.  The blocks they just put up, once they pour the concrete into the reinforcing holes at the top, will allow your home to withstand Florida hurricanes quite nicely. The holes at the bottom of the blocks are inspection holes so they can ensure the concrete pour went all the way to the bottom.  The little pieces of plywood they will cover the holes with will keep the concrete from escaping will be removed by the building inspector to ensure the pour meets code.”

So, of course, I had to Google that.  I don’t know that I can ever train myself to say concrete block even though I learned the difference here. JR also sent me a photo of his house at the same stage of construction. Very cool.

And, Derrick Knight, a blogging buddy who is obviously a bird lover, posted the question:  “Better and better. Are the cranes there to help with lifting?” Now that got me to thinking.  Did the machine for lifting heavy loads get named because it has a long neck like the bird crane?

Three workers were in the house when we arrived in the morning.

One was assembling roof sections with the trusses that are lying in the front yard.

This woman was putting up furring strips on the exterior walls. 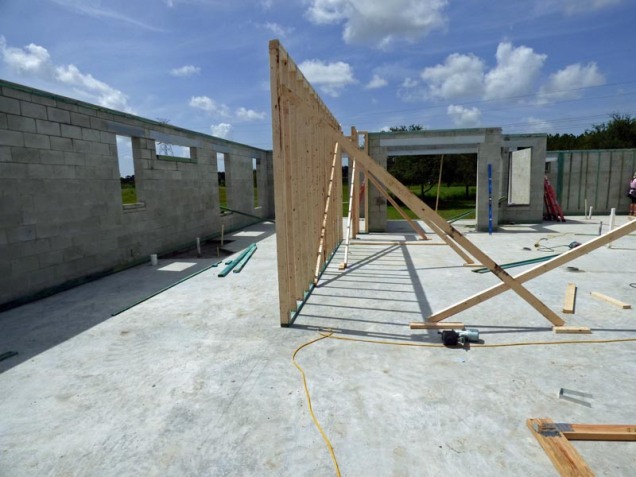 The cement pumping crew arrived and this man dragged in several big hoses.  I loved his hard hat. 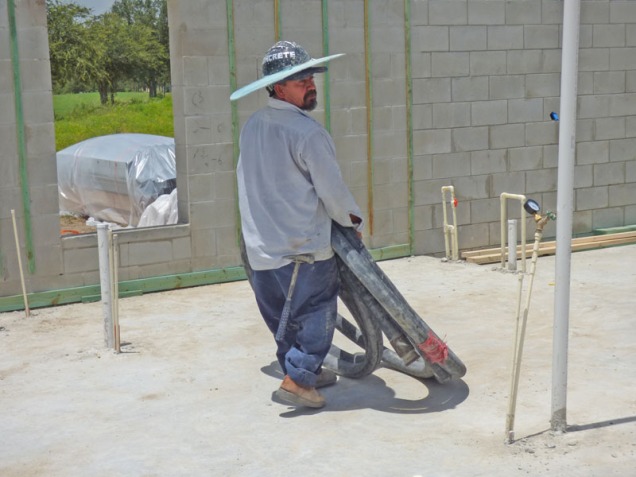 Here is a better look.  I think the brim is made of styrofoam of some sort.

When we stopped at the house on our way home for lunch, the cement truck was there, 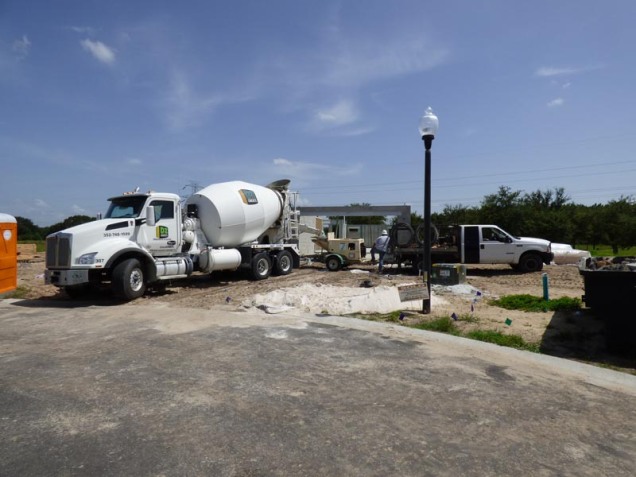 pouring concrete into the pumper.

A crew of four was doing the job. One was operating the concrete pump. Two were atop the walls.  One was holding the hose pouring the sloppy wet concrete into the wall. The other one was using a shovel to smooth out any overflow.  He also inserted anchors into the concrete to hold down the roof trusses and ceiling joists. I’m sure the hose was heavy and hard to maneuver. I noticed that he was not actually holding the weight of the hose full of concrete.  That vertical metal rod on the hose has two hooks, one at the top for a handle and another stuck into the concrete block to hold the weight of the hose while the man only had to manage the section of hose above the hook. He could easily move the hose with the hook at his waist height.

The man with the hard-sun-hat was the hose wrangler.  When the fellow at the top moved the hook, he lifted the weight of the hose to make it lighter for the man on top. He also yelled for the pumper to start and stop. 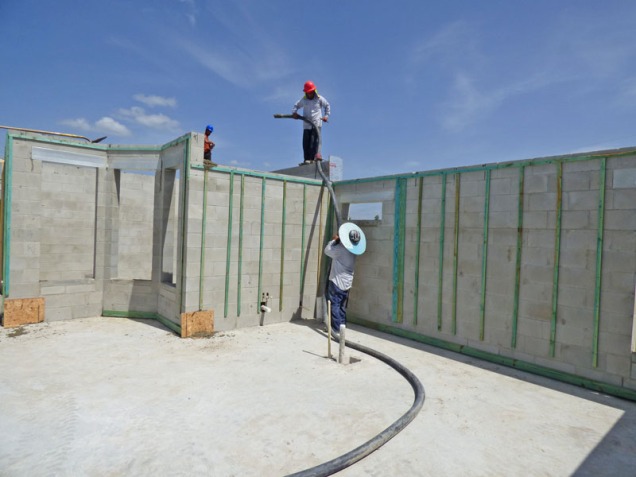 We went back at the end of the day to look around after everyone had gone home. The anchors were shining in the late sun.

The sandhill cranes were grazing next to the golf course, no doubt getting fuel for tomorrow’s heavy lifting.  The carpenter told me they are going to put up trusses tomorrow. 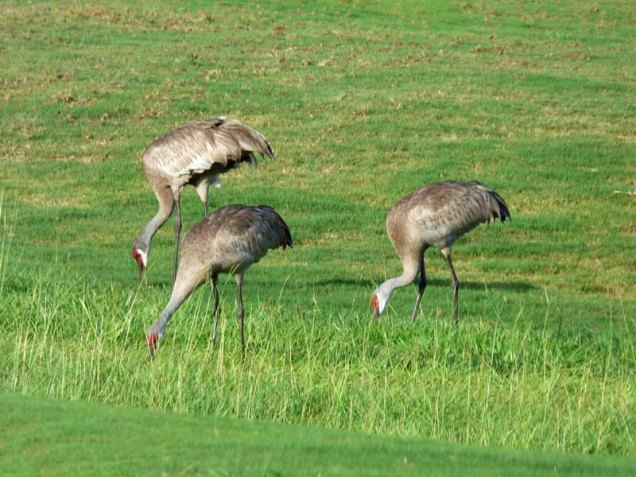 I thought the roof section looked like modern sculpture in the early evening sunlight.