This was the scene as we drove up to the house this morning. Hard-hat, Sun-hat man was shoveling sand out of the shallow gutter in front of our newly paved driveway. It was some of the smoothest cement I have ever seen.

The other man was taping off the front porch to prevent anyone from walking on it. He said they had started the job at 6:30 this morning. See that glob of hardening concrete in the lower left of the picture? 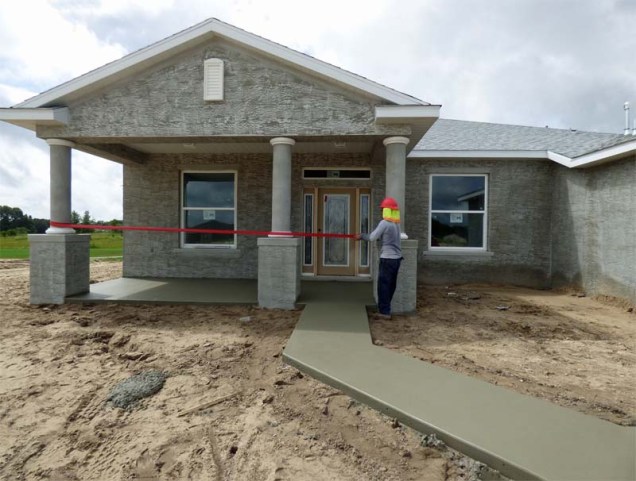 This brilliant orange Gulf Frittilary butterfly was tasting it all over.

We walked around to the back of the house to see the new patio.  That notch in the foreground will one day be my kitchen herb garden just outside the bedroom door. I would like to have had the patio a bit deeper, but it is already to the building setback line.

We went home for lunch and later in the afternoon drove to Besco Electric Supply and Lighting Center to look at light fixtures. I couldn’t help but notice yesterday that there is no light fixture in the dining room. I came home and checked my paperwork, but there was no light fixture mentioned for the dining room.  Then, I vaguely recalled not liking any of the options presented during what they call the “build com”. I wanted a fixture where the lights are aimed down rather than up like ninety-nine percent of the chandeliers seem to be. I had a lovely light fixture over our dining room table in our house but did not like the shadows cast on the table. They had one similar to the style of the kitchen lights.  Ours is going to have plain white glass rather than what I learned is called “tea stain”.  My goal was something traditional, a bit fancy for the dining room, but not too fancy. I still turned on the lights in most of the crystal chandeliers just to look at the sparkle.

Of course, we stopped back by the house for another look. All the new cement was covered with plastic, the same stuff they put under the roof shingles.  There were two trucks parked out front so we knew something was going on inside.

We spotted a generator in the garage.  It was tilers. (I looked that up.  A person who lays tiles on roofs, walls, and floors is called a tiler.) It was not the Russian, but a cute young tiler. She is the one who came and scavenged some ceramic soap dishes from our garage a few weeks ago.

The tiles are beautiful, even though they are more brown than gray compared to the blue/gray walls.

My scale model, Andy stood by the air conditioning condenser/compressor.  I’ve never had one so tall.  The brand is Carrier.

Two Sandhill Cranes were in the back.

The back patio was also covered with the heavy plastic.

The cranes were keeping an eye on us but were not too concerned. 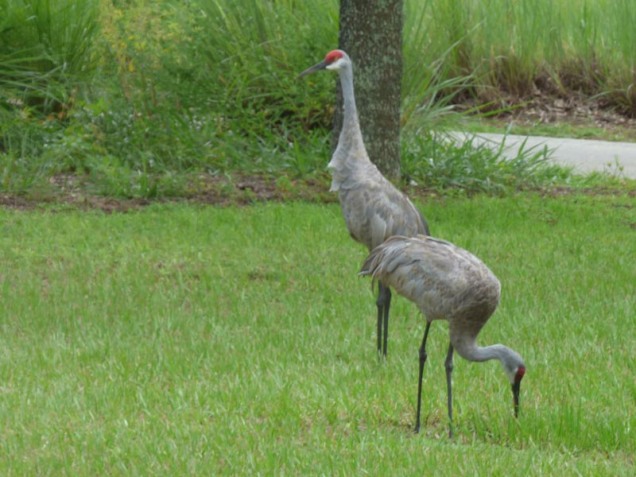 13 thoughts on “Cement, Chandelier, and Tile”