Today, we officially moved into the house. We are leaving for another truckload of furniture on Thursday.  While we are gone, our lease on the RV lot in the Ridgecrest Resort will expire. So today’s adventure was getting the RV ready for the road.  It is always a chore when we’ve been stationary for a long time. All went smoothly.  We hooked up the tow dolly to the motorhome and I drove to the house. Andy followed me in the car. The house looked small with the motorhome taking up the driveway and hanging out into the street.

I pulled Sao up close to the garage to minimize the walking necessary to carry things inside. 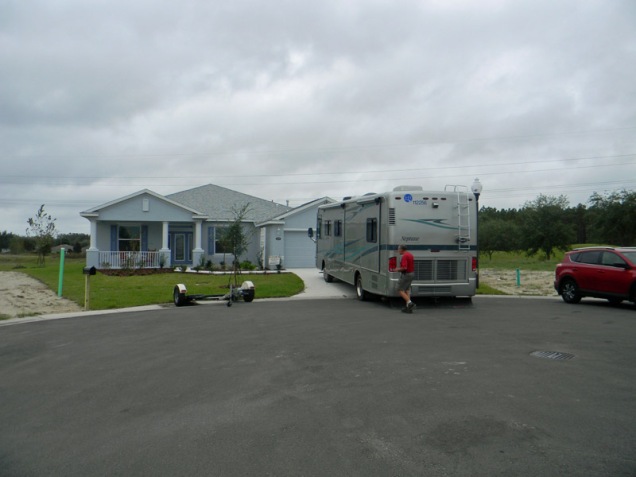 We spent the rest of the day moving from the motorhome into the house.  The first task was the food in the refrigerator.  Then the freezer. Next, I attacked the upper cabinets in the salon.  I would fill boxes with food from the cabinets and Andy carried them into the house for me.  Then, I would go inside and put things in the house cabinets. We used two not-too-big boxes so they would not be too heavy.

The biggest chore was my motorhome pantry, which is under the futon-style sofa.  Andy held the seat up just enough for me to take things out while not so high as to open it flat into a bed – with me under it. It’s a tricky proposition. That is where we store our Costco-sized packs of beans, broth, and canned tomatoes. I also store seldom-used pots and pans under there. You know, the monthly birthday cake pan.  The wok.  The sandwich press. It is amazing how much food I had under there. We could easily survive a month on it.  Then, there was also Andy’s emergency supply of maple syrup, five jugs no less.  You’d think we were running a bakery with the four large bottles of vanilla extract.  He puts that in his morning waffle mix and isn’t taking a chance on running out.

Under the kitchen sink was no better.  I had a bottle of every kind of oil I can think of.  That’s what happens when I try a new recipe I’ve seen online and it has some exotic (to me) oil as an ingredient. I also have four or five kinds of vinegar.  Oh, and there’s the olive oil for cooking, the more expensive olive oil for salads and other uncooked dishes. Then there is the bottle I bought at a grocery store in case I ran out of the Costco oil before we got to a Costco. And, let’s not forget my huge jug of coconut oil.  It’s yummy for sauteing chicken, by the way.

However, the pasta is my worst food hoarding sin.  I have two shelves worth.  It’s Publix.  They get me every time with the BOGO (Buy One Get One (free)).  Whenever they have a bin of pasta at the front of the store with the BOGO sign, I toss two in the shopping cart.  There is not a single place where they were stored in the motorhome.  Today I found spaghetti, lasagna, fettuccine, elbows, bow ties, rotini, shells, and even some fancy-bagged “handmade” pasta noodles in five different compartments. And I don’t mean one of each kind either.

In the midst of moving, about lunch time, we went to Subway for sandwiches.  My kitchen is too messy to fix lunch! After a quick stop at Publix for a few items (no pasta this time), we stopped in the community office to get our gate-opening passes for the car and motorhome. This errand took quite a while as there were multiple forms to complete and people coming in and going out with lots of chatter to distract us.

Andy brought our computers, and all their accompanying paraphernalia, inside and set them up in his office.  I guess I should call it THE office.  I even have a desk in here.

All the food is out of the motorhome as well as many other objects we happened to pick up and bring in with the food. Tonight both of us have made several trips to the motorhome to get a forgotten item that we need for the night. I can’t seem to remember two things for one trip.  One trip for the nightgown.  Another trip for my traveling toilet kit with all I need for the night.  Another trip for the phone charger.  Back out there again for my medicines.  Andy made as many trips as I did.I made one last trip – for our pillows.

We don’t have our bed yet.  However, our family room sofa is a hide-a-bed.  I had already laundered some flannel sheets I found in a box. When Andy was ready to go to bed, we opened up the sofa and put the sheets on.  Then,  I made one last trip to the motorhome – for our pillows.