I met Sherree, a neighbor, in the grocery store and invited her over for coffee the next day. We chatted amiably for a while and then the subject got on to missing family.  She told me that she flies to Minnesota to visit her grandchildren every month or so.  Right then and there I decided that I needed to go to Wisconsin to visit my grandsons.  When I called to say we were visiting for Christmas, Son-in-Love George said, “Come earlier, for Cam’s birthday”. We drove.  It is a two-day trip from central Florida.  I love to drive.

It started snowing when we crossed the Wisconsin border. Driving into the small village of Thiensville at night, in the snow, with Christmas lights was magical.

Cam turned four on December 16. George had already suggested presents to me.  Lego’s are a big hit in that household.  At six years old, Owen is an accomplished Lego-set assembler.  Cam will be too, but not yet.  He concentrated mightily and studied the instruction photos. Andy offered suggestions.

Daughter Jennifer laid out a beach blanket to contain the many small pieces.

Big brother Owen could not contain himself and just had to step in and help out.  Mama told Owen not to do it for Cam, but to help Cam do it himself.  That worked out fairly well.

Darling, snuggly little Cam had a snotty nose. I knew I was in trouble immediately. I caught the cold. That didn’t stop me from going to the nursery school Christmas program where Cam wore and penguin hat. One of the songs they sang had something to do with penguins.

They served a pasta dinner after the program.  Here, Owen was watching the goings on in the room.  He has changed from a little boy into a boy this year.

George and Jennifer were both off work for the week between Christmas and New Year.  On Christmas Eve, George decided to work on the treehouse he is building for the boys. It was snowing.  But, he was off work and had time to work on it.  At one point he came in and asked Andy and Jennifer to go outside and hold the ladder for him. 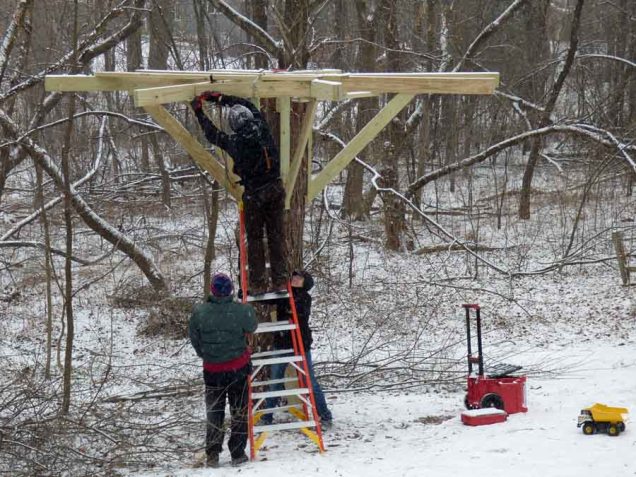 Despite the cold and snow, George worked on the treehouse for most of the day.

Actually, it is a stump house.  They had two trees cut down at the edge of the woods behind the house. Both were left as tall stumps. George is going to use both for the “house”.  I am excited about it.  The plan is to build it to look like the Drum Point Lighthouse at the Calvert Marine Museum in Solomons, Maryland (near our home).

I’ll provide an update on this project in July.

Christmas day was a delight.  We had cinnamon buns for breakfast, emptied stockings, and then opened presents under the tree. This is how it looked before opening them. Note: Jennifer made the very cool star atop the tree.

George got a t-shirt from one of his siblings.

Jennifer got one too.

Owen loved the Lego set we gave him. Oh, I should have taken a picture of that train in the background.

Cam got a watch and studied it intently.

I was sick most of the time.  The cold turned into a sinus infection. I went to the doctor while there, as I had developed bronchitis after my visit last July. I keep it delicate and just say the antibiotics wreaked havoc with my gut.

It was ten below zero the morning we headed south.  We had planned to stay longer, but Sister Barbara called with her schedule to visit us in Florida.  We were happy to run from the cold, but it followed us.

12 thoughts on “Christmas in Wisconsin”