We left Twentynine Palms on the 18th and headed out into the Mojave Desert. The Arizona mountains are dark brown, rocky, and formidable.  Vast plains of low scrub separate them. There is nothing green in sight.  After traveling for miles and miles, we would come through a pass to yet another vast plain of desert. I seemed it would never end.

Eventually, we crossed the Colorado River at Parker, AZ and into Arizona.  Then we were actually in the dark brown jagged mountains.  The river is lined with homes, resorts, and casinos. I snatched this image from the internet to give you an idea. 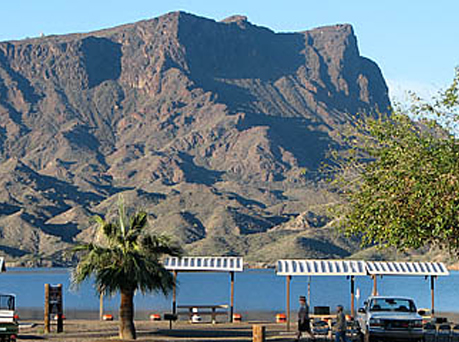 We arrived at boating-friends Paul and Sheri’s house late in the afternoon. It was hot in Lake Havasu and getting hotter. Paul and Sheri said they were staying in the house to avoid the heat.

The next morning we were all acting like the teenagers, each on our own device engrossed in “whatever”.  We did not send each other messages though.

The plan for the day was to take the ferry across the river to the casino in California. Here, we were waiting for the casino ferry to moor. It was 116 degrees Fahrenheit out there!

I interior cabin was air conditioned and Paul and Sheri opted to sit inside.  Andy and I sat up top in the open (but under a hard top and in the shade). I figured we would be cool enough in the breeze generated by the boat’s movement. We were.

Not being gambling people, we went to the restaurant for lunch. This was our view.

The lake is quite wide there, but I used the zoom lens to capture the ferry returning from Lake Havasu City.  We could not see it with the naked eye.

I loved this waterfall wall at the entrance to the restaurant and gift shop.

We have known Paul and Sheri for about twenty years now.  We met them at a Trawler Fest in Solomons, Maryland and they subsequently bought a boat similar to ours. We sat inside the air conditioning with them for the return trip.

Paul told me that these are the “needles” giving the name to the city of Needles, California upstream.

This is a view of Lake Havasu City, Arizona from the middle of the lake. It seems like an insane idea to dismantle the London Bridge and set it up in the desert of Arizona.  Yet, an entire city (full of part-timers and retirees) has sprung up by it.

Lighthouses are “the thing” in Lake Havasu City.  Different areas have replicas of the lighthouses from different regions of the United States. This one sits at the entrance to the harbor.

I took this photo of the real London Bridge as I disembarked from the ferry.

I looked it up and think this tree is a Cercidium ‘Desert Museum’ Low Branch.  But, I also think Paul gave me another name for it so I might be wrong.  They look so thin, yet the little bit of shade they create makes a big difference in the feel of the sun on the skin.

One-hundred-sixteen degrees does not seem so bad when you go from house to car to ticket office to ferry to restaurant to ferry to car to house.