We drove to the house mid morning, but no one was there. We walked around a bit anyway and then stopped by the grocery store for some fruit before heading back to the motorhome for lunch. Since there was no one to watch working, we decided to explore Venetian Gardens.  We have passed it a number of times and often said we would have to check it out one day.

Venetian Gardens is a city park in a cove off Lake Harris. It turned out to be quite nice.  Just inside the entrance is a large playground with a water-park for small children.  I didn’t get a good look, but I think it was mostly sprinklers and no water depth.  Good idea for the little ones.

We drove through the park and out the other side looking at the large older homes among gigantic live oaks on the lake front.  Then we turned around and parked in a parking area inside the park.  It is called Venetian Gardens because there are canals and bridges, a la Venice.

We followed the walkway along the big water. 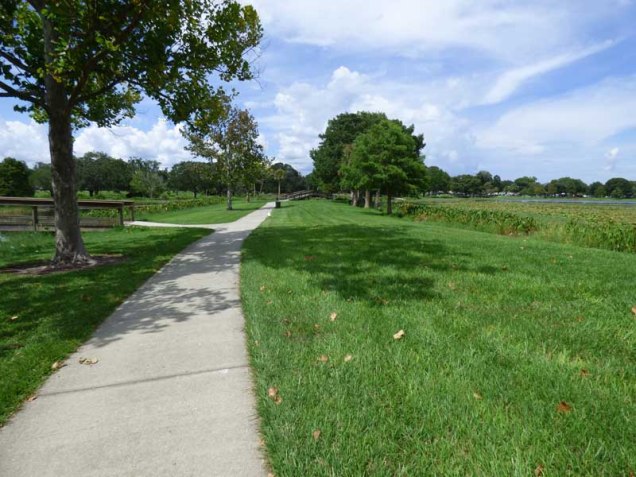 The place is alive with water birds.

I was surprised to see an Anhinga.  I think of them as Everglades birds. That is not eggs under the wing; it is a pile of snail shells.

There were several bridges and islands among the canals.

The gap in the trees in the distance is the opening to the main body of Lake Harris. 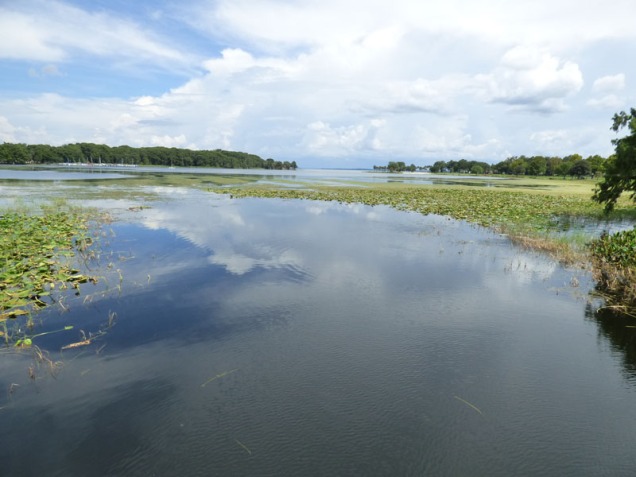 We found a nice bench overlooking the lake and that ended our walk, except to get back to the car.

There are a good number of cypress trees in the park.

The bird we saw most often today was the Common Gallinule.  This bird is very dark, appearing black to me.  I thought it was a Common Gallinule until I got it on the computer.  It is a Purple Gallinule.  I should have known by the white forehead.

We’ll go back to Venetian Gardens again for future walks.