It was a WOW day in Arches National Park.  We were up and out early to take advantage of the morning sun and to, hopefully, avoid some crowds.  The first stop was the visitor center where we got advice on where to go, what to see, and where to hike (or not hike).  We watched the movie, which explained how the rock formations were formed.  Andy stayed awake the whole time.

Our first stop was the Devils Garden all the way in to the end of the road.  The Landscape Arch was a far as we got.  We made a few roadside stops. At lunchtime, we drove back out of the park and ate in Moab. Then we decided to take leftovers back to Sao and rest before heading back into the park for the afternoon.  I took 367 pictures today, but none of them capture the enormity of Arches.  None of them capture the grandeur. A few of them do capture the color.  Just about everything is red here.

There is really not much to say about the pictures.  I’ve included more than normal, but I will write less. 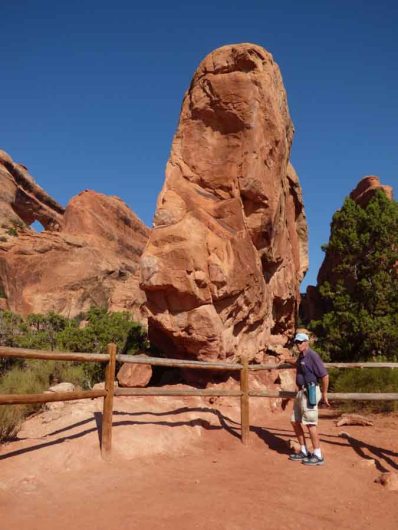 This is Broken Arch, not really broken, but has a crack. I think the right side looks like an eagle head eating the left side. 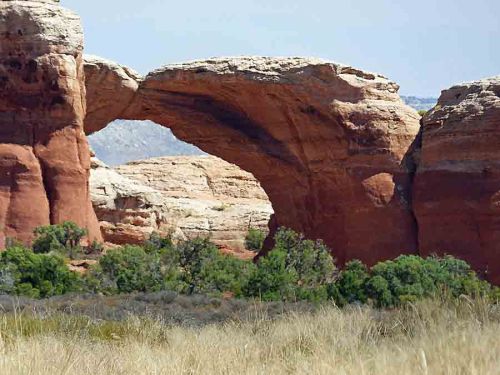 I think this is Courthouse and it is truly enormous. It is prettier than this picture shows. I was not sure which massive structure was the courthouse towers, but this is my guess.

This is the beginning of the trail at Devil’s Garden.

This is the Landscape Arch.  It is the longest in the park at 290 feet wide.

Balanced Rock. This picture has the best color. 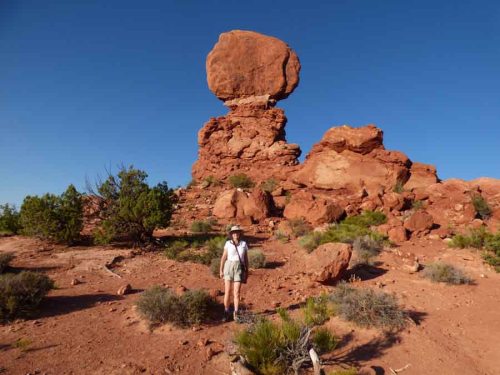 This rock is next to the Balanced Rock.

Park Avenue was a surprise. We couldn’t see this scene from the parking area.  It was a wow at the end of the sidewalk. 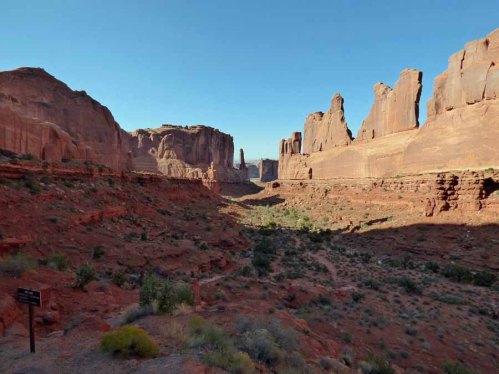 This pinnacle with the top slid over is on the left side of the scene.  How did that happen? 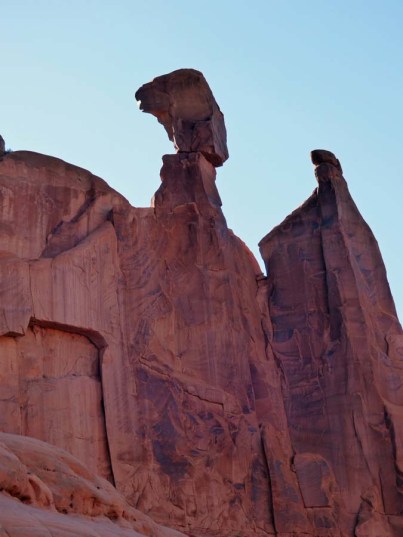 Sand Dune Arch was one of my favorites because we walked between huge rocks to get to it.  The sand was deep, like a beach, except that it is red. Andy stood under it for scale.

This is Skyline Arch. A huge boulder fell out of it some years back. We walked to the base to see the crumbled boulder.  I did think about how wise it was to stand there.

The Three Gossips is one of my favorite formations, but I did not get a good picture of it today. These are gigantic. In fact, there are many formations that look like people to me.  They reminded me of those Indian paintings of a small group of people close together with their blankets wrapped around them.  I can’t remember the artist though.

I stood at an overlook with a picture board naming many of the formations.  This one was not named.