I have been wearing myself out trying to see it all. This morning, Andy decided that I needed more rest and did not wake me up.  I slept until after 0800. I took a shower and packed our lunch and we were ready to go.

We decided on the Needles district of Canyonlands National Park.  I wanted to see those pinnacles that always seem to be in pictures of the park. I had hoped to get up close and personal with those needles, or pinnacles of rock.  But, they were far away.  I was disappointed in that, and only that, about our trip today. Again, the drive to get there was also scenic. The rocks in this area are almost fantasy and Disneyesque. (Did I just invent a word?) They were also humorous, at least to me.

We saw more “Open Range” signs with pictures of cattle and Andy, still thinking about the singular for cattle, announced, “To refer to a single one as cattle, is unherd of.”

As usual, the first stop was the visitor center to get advice on hiking and eating lunch. We went in to watch the movie, but left after a few minutes; it was the same movie as shown in the Island in the Sky district.

We got such a late start that lunch was our first stop in the park.  Here is our lunch view today.

I love the simple covers over the picnic tables in this park.  They are really needed for the sun. Here, I was looking up while eating my sandwich. 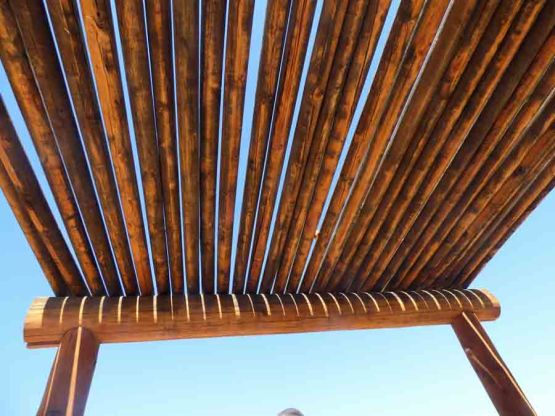 The ranger at the visitor center had told us to take the short hike behind the picnic shelters to the top of a rock for a nice view. We got a distant view and saw the whole humongous rock we had driven around. 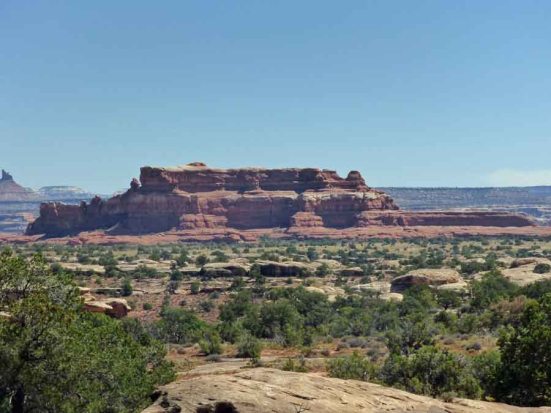 We saw a number of prickly pear cactus with fruit.  I did not pick a single pear and probably will never try that again for the rest of my life. There were pretty though.

Another interesting thing on that hike: We have been warned everywhere to only walk on the trail, rock, or sand in washes.  The black crusty ground in alive!  Today was the first time that we have actually seen any. They call it “biological soil crust”.  It contains Cyanobacteria, one of the oldest known life forms. It is very important to the park.  Read all about it on the park’s web page. It’s amazing stuff.

We didn’t do much walking today, only logged 1.5 miles on the pedometer from the time I got dressing in the morning till night. Our second hike was at Pot Hole Point. I had seen people walking under the edge of this rock while we were driving to the parking area.  Andy stood under it for scale.

The whole walk around the cluster of boulders was on what seemed like one giant flat slab of rock.  It is pocked with pot holes.  The sign said that, when it rains, the holes fill with water and small water creatures come to life in them. They have adapted to extremes of heat (to 140F), cold (below freezing), and drought. The park web page has a great, and fascinating, description.

There were several views of canyons from the edge of the rock plaza, but my pictures were not interesting.  I thought these white rocks were interesting. They are natural, modern art sculptures. 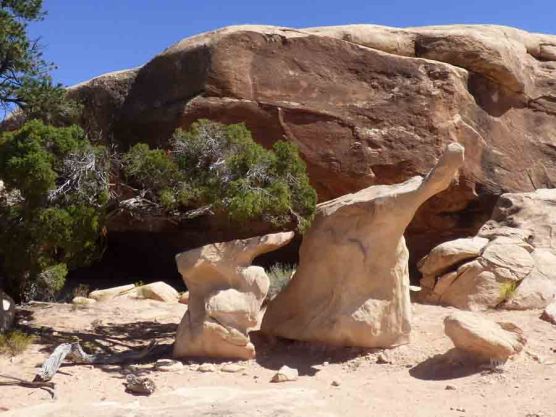 Here, Andy is walking into a gap between the cluster of boulders.

Our next stop was the Big Springs Canyon overlook at the end of the road. I’ve included the parking area here to show just how big the rock formations are. 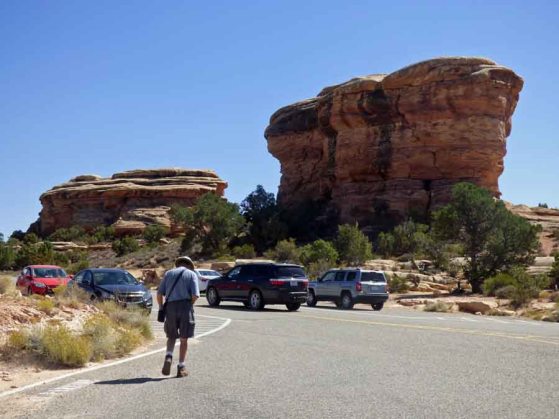 The rock is not particularly interesting, but I liked the dead tree in front of it.

This section of rock looks like something melted or maybe the icing dolloped on top of a cake before being spread out. All day long, I wondered how these shapes came to be.

I don’t know where I saw this one, but I, aptly, named it Cow Pie Rock, although it could be just as well named Moon Pie Rock or Hamburger Rock. 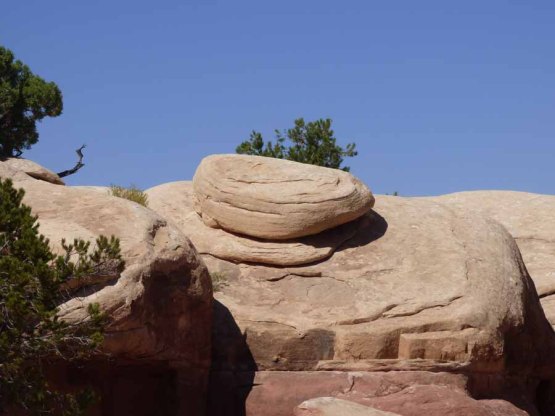 This is the Wooden Shoe Arch atop one of the city-size rocks. It is as big as an office building. Andy objected to it being called an arch.

These fanciful rocks were always inaccessible by foot, as far as we found.  I had to use all the zoom to get this much.  The look like a village of little huts.  I wish I could have gotten closer to walk among them.

We took a tour around one of the campgrounds and I spotted this rock.  What a shape! When we got farther around, I realized that it was two of them and the road side was a camp site.

You can barely see the man at the picnic table under the rock overhang.

We had seen Wilson Arch right on the edge of the highway while driving south this morning, but did not stop because there were a lot of cars there. I stopped on the way home to get my picture.  It is very large and thick. There were people standing in it in the morning to give it some scale, but none in the afternoon.

So I had to find one on the web to show the size.

Thank you www.OutdoorExposurePhoto.com for just the right thing.