We drove through Zion National Park and on to the Grand Staircase Escalante Monument today.  It is a gigantic area and we did not see much of it.  The woman in the visitor center told us not to drive off the pavement, due to the recent rains.  Most of the roads are unpaved.

Our first short drive was in Johnson Canyon. It was a scenic drive, but did not really have any points of interest.  We did see what looked like the remains of a deserted town. Our friend Ed told us later that it was the set for the TV show Gunsmoke.

We encountered a bull walking down the road so I stopped to take his picture.  He looked at me when I said, “Hey buddy”, but Andy noted from the back seat that, “He is not your buddy”. He looked at us for a moment and then continued on down the road. 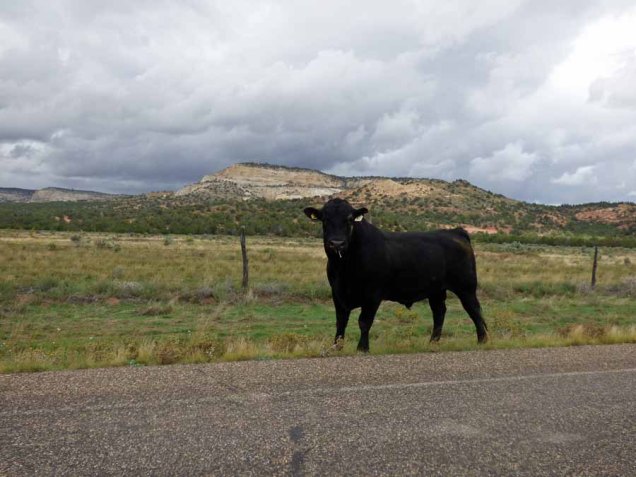 We got tot he end of the pavement and turned around.  We decided to stop at a spot with some nice rocks, but when we got out of the car, the wind picked up and it started raining.  We were back in the car in about 15 seconds.  Andy had not even gotten out yet.

We continued on eastward to the Toadstool trail. This is another canyon off the highway.  I thought it was interesting that the hiking trail was in a wash. It was obvious that a lot of water had passed through recently.  We all got sandy mud on our shoes. But, the was was so shallow, it was a step, not a climb, to get out fast, if necessary. 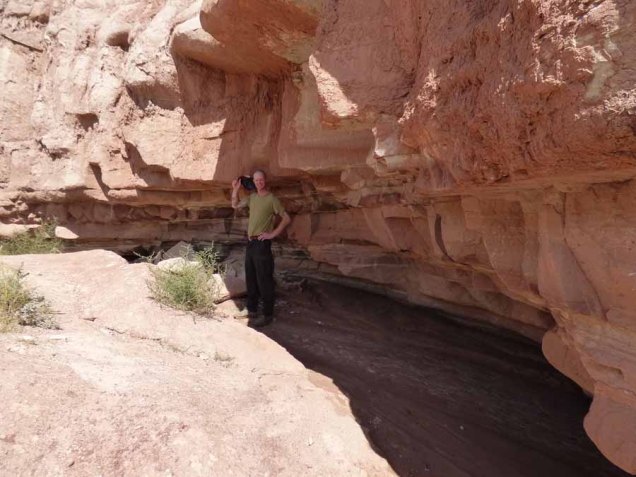 We headed back to Kanab, Utah and met “Little Eddie” at the Escobar Mexican Restaurant.  Here’s a story.

Ed worked as an electrician at the Eau Gallie Boat Works, just north of Melbourne, Florida, where Frobenius visited way too often. We loved that boat yard.  They always did good work and we enjoyed the crew. We called him “Little Eddie” to distinguish him from the boatyard owner, “Big Eddie”.

One day Little Eddie was changing the shore power outlet on the back deck.  I, always with my camera, decided to document the job being done.  It must have been just dark enough with the hardtop over the back deck, because the flash went off.  Little Eddie just about had a heart attack and dropped everything, thinking he was getting an electrical shock.  Then he realized that it was my camera flash. On his knees, on the back deck, he turned around, looked up and pointed to me.  “Don’t …you…ever…do that…again!”  We laugh about it now, but I’m sure it was not funny to him at that moment.

We have made contact over the years and this time found each other on Facebook, I believe.  He lives in Kanab, so we had to get together. It was great Mexican food and lots of it.

On a sad note, we passed numerous vehicles and park search and rescue personnel on the roadside as we were going through Zion in the morning.  Then, on the way home, we passed five or six park vehicles on the side of the road near the other end of the park. We don’t know if they were associated with the recent tragedy in the flash floods or are separate, new incidents.