I downloaded pictures from my camera tonight.  Looks like I got a bit behind again.

I didn’t get this one square on but want to share my farmer photo with the farmer painting. This is the only portrait I have of Grand-daddy and Grandma.  He always wore overalls as far as I know.  All my life, just about everyone I know in North Carolina has told me that I look just like my Grandma.  Actually, they say I’m the spittin’ image of her.  Funny expression, given that she used snuff. I don’t recall that she “sniffed” or “snorted” it.  I remember seeing her putting a pinch inside her cheek.  I could be wrong.  That was a long time ago.  Grand-daddy rolled his own cigarettes.  That is an empty can of Prince Albert loose tobacco sitting atop the photo.  I found it in the barn after he died.

This is a look up our street to the left of our house on January 9.  There are three houses nearing completion. The closest and the farthest are the same model as ours.

There is still an empty lot between us. 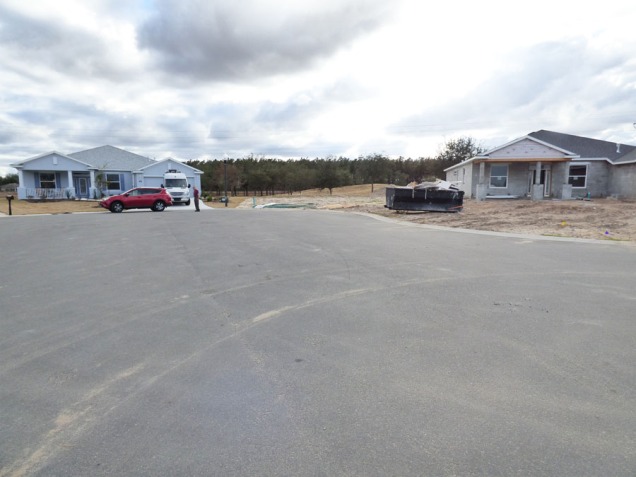 In fact, the lots on either side of us are still empty. 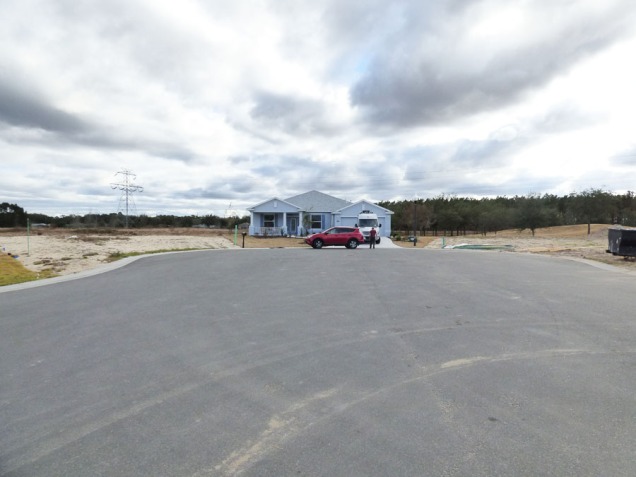 I got an email from our keys neighbor, Rosa.  The project keeping their trailer on our lot for months is nearing completion.  A big crane lifted their trailer up and onto the new raised platform they had constructed. So we drove Scamp to Marathon to clean out our shed before Andy is too busy getting a new knee.  Hurricane Irma had filled it with about three-and-a-half feet of seawater, seaweed, and mud.  We were amazed that our plastic Home Depot shed remained standing when so many large trailers were washed away.

Here is Scamp in our RV lot.  The golf cart belongs to Rosa and Charlie.  Notice that the mangroves are mostly bare. Our gorgeous wall of green has been denuded and the mangrove forest is full of trash. It is not just trash, but the household goods of people’s homes. The mangroves have already sprouted out new leaves – in clusters. The ones closer to the ocean are still bare. 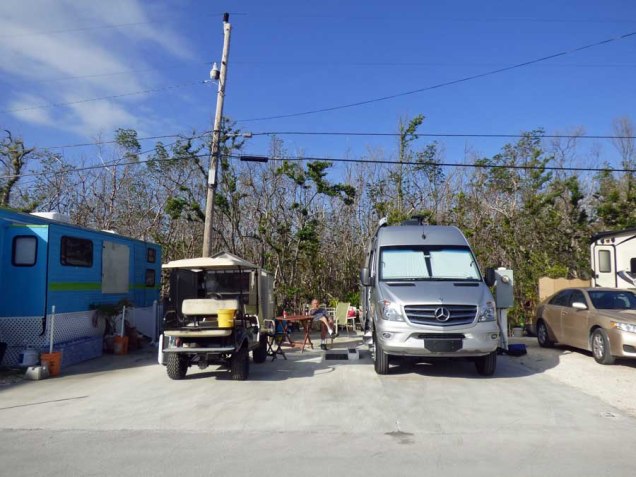 Here is Charlie and Rosa’s trailer on its new perch. There are stairs to get up there behind that gray gazebo roof. They subsequently lowered it down into that notch.  They used jacks and pulled out the concrete blocks one level at a time. Doug and Sandie’s house next door lost siding.  They are still waiting for a building permit to get it replaced. I was surprised you need a permit for siding.

Here is a look at our shed during the cleanup. Andy had taken out part of the patio furniture and the grill.  I dragged out the small stuff.  There was a thick layer of mud on the floor. 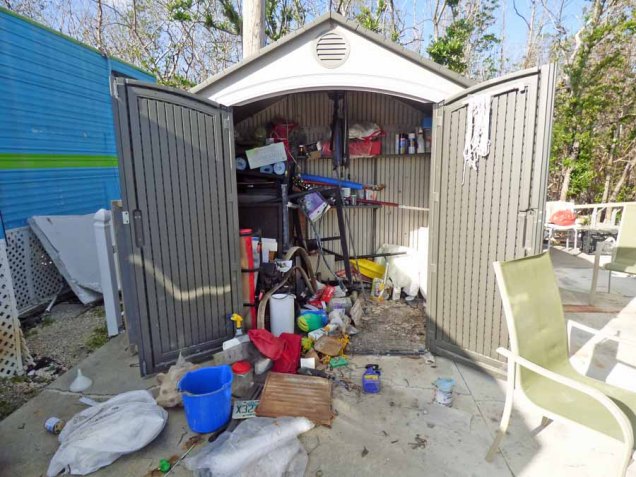 The barbecue grill took it hard.  There are big rust spots all over it and a few dents here and there. We did not try to turn it on this trip. 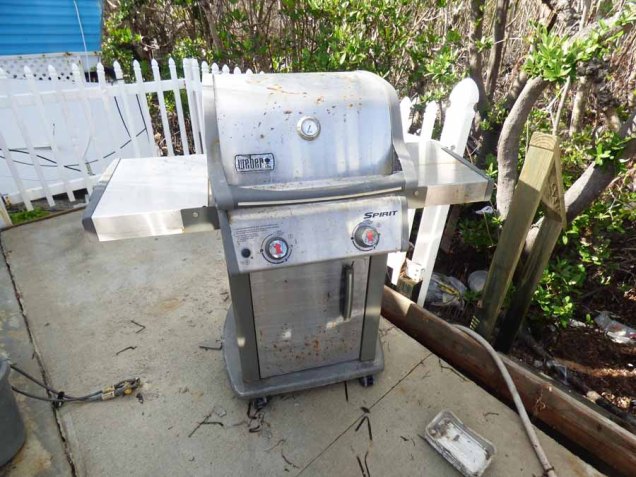 All in all, the shed was not nearly as bad as I was expecting.  Rosa had told me that she cleaned out some of the seaweed.  The furniture was muddy, but I did not see any mold.  I had expected everything in the shed to be black and fuzzy.  The furniture, including the cushions, came fairly clean with a water hose.

Good boating buddies, Martin and Betsy, came to see us.  They had planned as many visits in one week as we usually get in two months.  I was craving seafood. 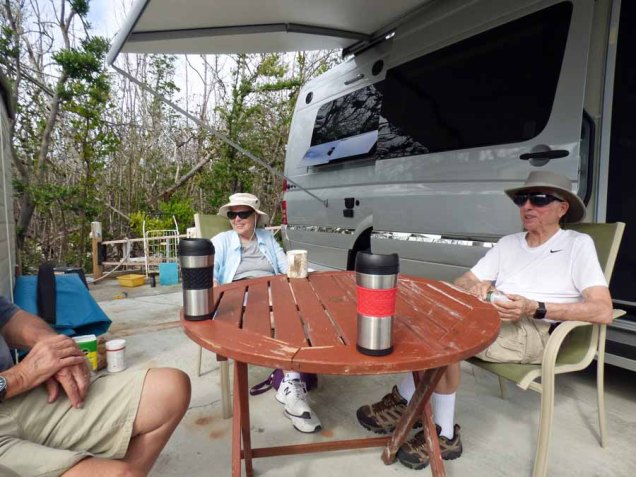 We went to Burdine’s where I ordered their fish sandwich while listening to Joe Mama play and sing. I don’t know why everyone raves about Burdine’s fish sandwich.  To prove my point, we went to Keys Fisheries the next day for hogfish sandwiches.  Martin agreed with me that it is far superior to Burdine’s. I would have taken this photo with the sea in the background but that was directly into the sun.

If you find a better fish sandwich than Keys Fisheries, let me know. Another day, we went to my favorite fish taco restaurant, Sparky’s Landing.  Their old building is completely gone and nothing but a level gravel lot now.  They reopened at the old Tarpon Creek, behind the Holiday Inn. It is a better place in my opinion.  I’ll still miss the old funky Sparky’s though.

We drove out to Sombrero Beach, which my regular blog readers have seen here many times.  It was almost unrecognizable. The hurricane pushed tons of sand out of the ocean and all the way across the street to the houses opposite the beach park. It has been pushed back to the beach by heavy equipment.  The thick lawn is under there somewhere.

Even so, the beach was full of tourists. Notice how much sand was lost beneath the boardwalk. 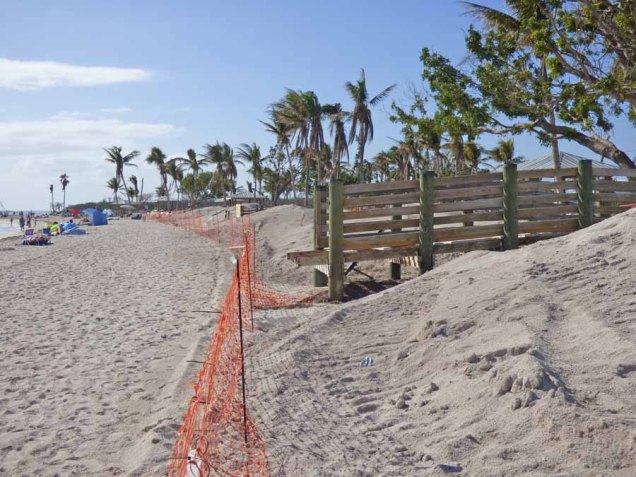 Back at the shed.  We used Charlie and Rosa’s golf cart to haul loads of destroyed “stuff” from the shed to the dumpster. The pressure washer bit the dust, or should I say bit the mud?  Several partial sheets of plywood showed little evidence of having been under water.

Martin and Betsy drove us to Home Depot to buy a push-broom and dustbin.  Ours had disappeared.  Later Rosa told us she found it in the mangroves and returned it to us. We brought the new one back home with us. The inch-thick mud was very dry and easy to scoop out. The hardest part was getting the last bit of mud and water out after washing it out with the garden hose.

One of the saddest sights is the canal in our RV park.  It is full of trailers, boats, and all kinds of other debris. This is four months after the storm.  The neighbors are in an uproar as our canal must be the only one in town that has not been cleaned up.  I don’t know why.

Here is a closer look at the distant heap.  I think that is a motorhome in there since it has a ladder to the roof. 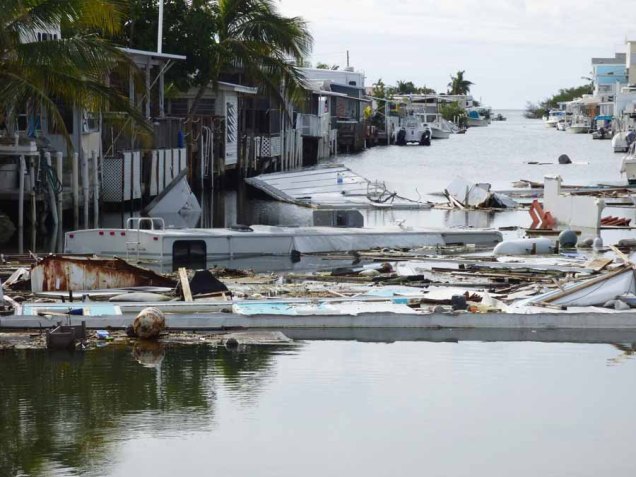 FEMA, the Federal Emergency Management Agency, is renting lots from our park owners to place emergency housing (FEMA trailers) on our now-many empty lots. I always associate FEMA with big, ugly, gray trailers.  All these FEMA trailers are recreational vehicles. 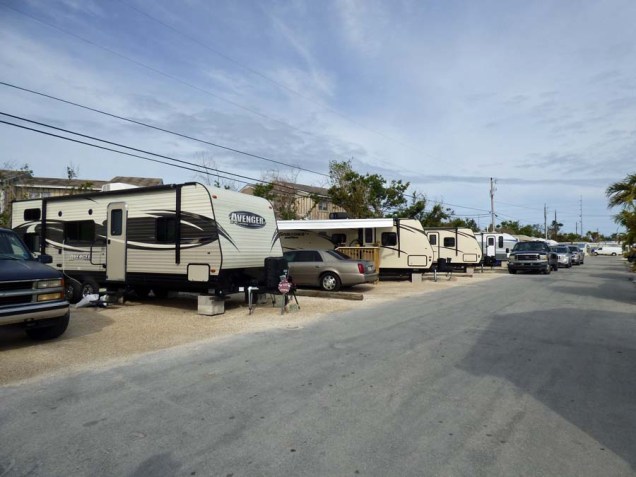 It was so distressing to me to see all the trash in my beautiful mangrove swamp.  Debris is into the woods as far as I could see. It looks like some good stuff in there, but it is so treacherous (and muddy) to try to get in there to retrieve it. I saw coolers, flower pots, and even a nice-looking tool bag. I know neither Andy nor myself should attempt to go in.  We would break a leg or ankle or both, for sure.  I hope to hire a young man to clean it up.

By the end of the week, our shed and RV lot were in much better shape.

I was lucky to get to the keys before the first concert of the Florida Keys Concert Association.  I have been working hard to keep track of ticket sales remotely and felt bad about not being there.  At least I was at the ticket desk the first night.  Sharon and Claudia seem to have things under control.  My friend Mary also showed up to help at the ticket desk.  She didn’t even stay for the concert. Then, I was able to attend the monthly board of directors meeting the day before we left.  The best part – more fish for lunch at Fiesta Key.