My family, and maybe some friends, know I like to “collect experiences”.  Something new, something outside my realm. Today, Christopher presented me with a new one.  The local fairgrounds, Redwood Acres, was hosting Monster Trucks. I actually had an idea what monster trucks are.  I must have learned about them from the grandson’s toys or videos as I can’t imagine where else.

We saw the bill posted for the show and wondered what that was like.  That was the end of it.  However, later in the day one of Christopher’s friends told him we must go to the show and see the boat races. That made no sense whatsoever as there is no water in Redwood Acres.  His friends said they tow boats, without trailers, around the paved race track. Well, who wouldn’t want to add that to their list of life experiences?  We decided to go,

As we were walking into the fairgrounds, a man stopped his car beside us and gave Christopher his $25 ticket. He had won it but had a high-school reunion to attend.  Andy and I got the senior-rate tickets for $18.  One advantage of getting older.

This is a small town facility with a small town crowd.  They were mostly families with young children and young singles. We joined two of Christopher’s buddies front and center.

The monster trucks were sitting on the far side of the arena. The cars in the center had already been well crushed from last night’s show. 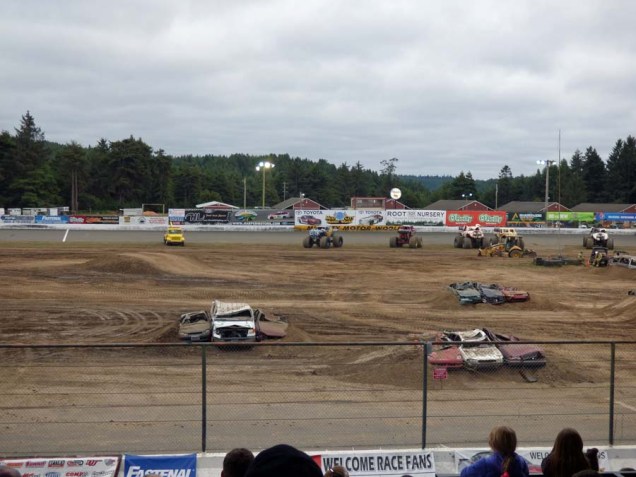 The show was actually much slower paced than I expected.  There was a lot of announcer talk and introductions.  Then, when the trucks did their thing (jumping over cars) they drove slowly and revved the engine at the last moment to leap over the cars.  They did go faster sometimes and “spin doughnuts” in the dirt.  The crowd cheered wildly for the dust clouds they stirred up.

I’ll admit it was impressive to see how high and far those trucks jumped.

There were also events for amateurs.  They did not jump over cars, only mounds of dirt.  There was one guy in what looked like a road-legal Nissan who jumped over the three squashed cars in front after he finished the dirt course.  The crowd went wild. 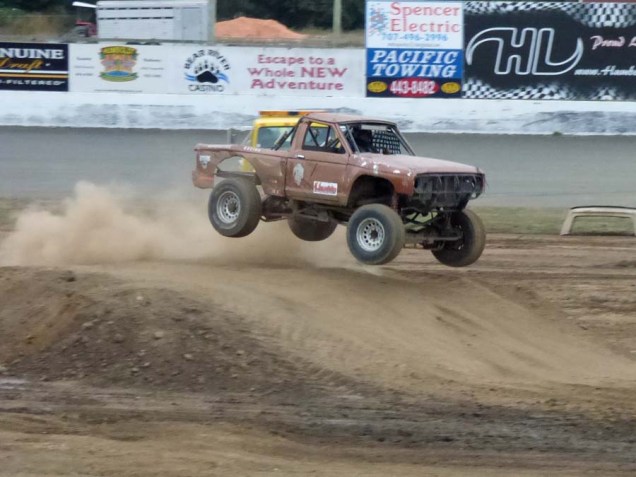 Another event was two monster trucks at a time racing around a course and jumping over cars simultaneously.

The boat races were absolutely insane, wild, and crazy madness. About twenty cars and pickup trucks came out and lined up on the race track towing a small boat hull with a chain. 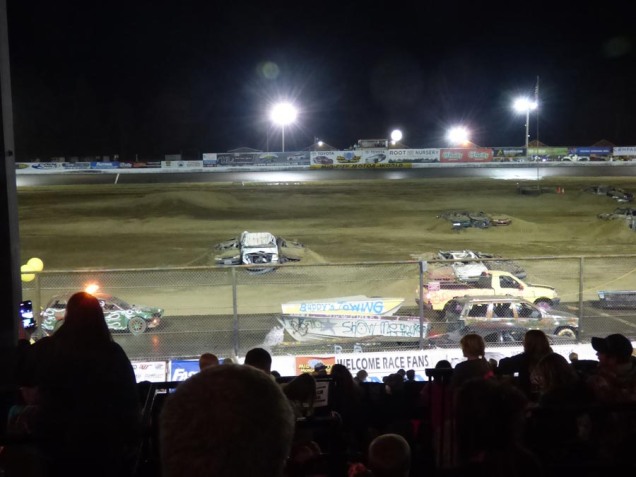 The objective was to be the last vehicle towing a boat (or some identifiable remnants thereof). They were going fast and, when they rounded a curve, the boats would swing around to the side of the vehicle.  They were running their vehicles into each other’s boats.  Then, they were running their vehicles into each other.  They were going way too fast.  And, unbelievably, some of the tow vehicles had several passengers riding along to enjoy the melee. 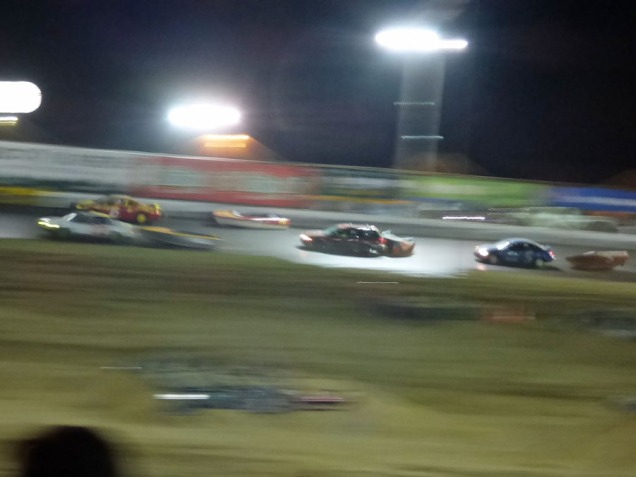 There were a couple bulldozers on hand to push lost boats off the track.  Many cars “died” on the track and the other wove between them – at high speed.  Oh, there were also two fires.  As I look at my photos and write this account, I still can’t believe what I saw. Whose insurance covers serious mishaps? What that even legal?  (Not that legal carries much weight in these parts.)

In the end, there were three vehicles still running with some bit of boat behind them.  The winner was determined by crowd applause. We all agreed that we got our money’s worth seeing this spectacle. Now I can cross monster trucks off my list, or add it to my list of life experiences.

During intermission, the spectators were invited to go on the field for a ride in two monster trucks with open seating in the back. Christopher decided that riding in a monster truck was an experience for his list.  They cut off the line just in front of him at intermission, so he returned at the end of the show. After he posed for this picture, he decided he didn’t want to wait in line and gave his ticket to a kid.

We left Redwood Acres still shaking our heads in disbelief.