I don’t see how a person could drive down California 101 and not be changed by the experience.  The scenery is stunning and the groves of redwoods are spiritual.  Of course, I don’t have any photos because I was driving. So, I copied a few from Google Images 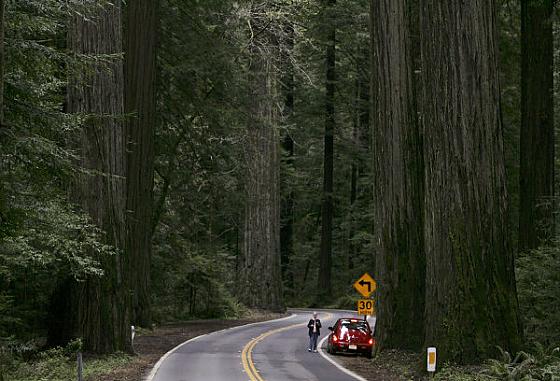 Farther south, we came to wine country in Mendocino and Sonoma counties.

We turned off of CA 101 at Petaluma and headed for the Richmond Bridge at the north end of the San Francisco Bay.  That is when the bad, bad traffic began.  We crawled through Berkley, Oakland, San Leandro and then turned East on I-580 to Livermore. Traffic was moving at the speed limit on I-5, but there was a lot of it.  We got off and headed through fruit and vegetable orchards and fields until we reached CA-99 and headed toward Fresno.  We turned off CA-99 at Madera and arrived at Erin’s house after dark, almost nine o’clock.

Erin and Gus were reading the children their bedtime stories.  She gave us instructions for parking at the side of the house and plugging into electricity.  She said we could use the bathroom and kitchen in the mother-in-law apartment there.

We slept with the back doors of the van open and listened to the coyotes howl and the dogs bark all night long.

Sister  Barbara complained that I had not posted any pictures of Cordelia.  I had taken some, but they were not very flattering so I did not post them.  Cordelia sent me two that she likes.